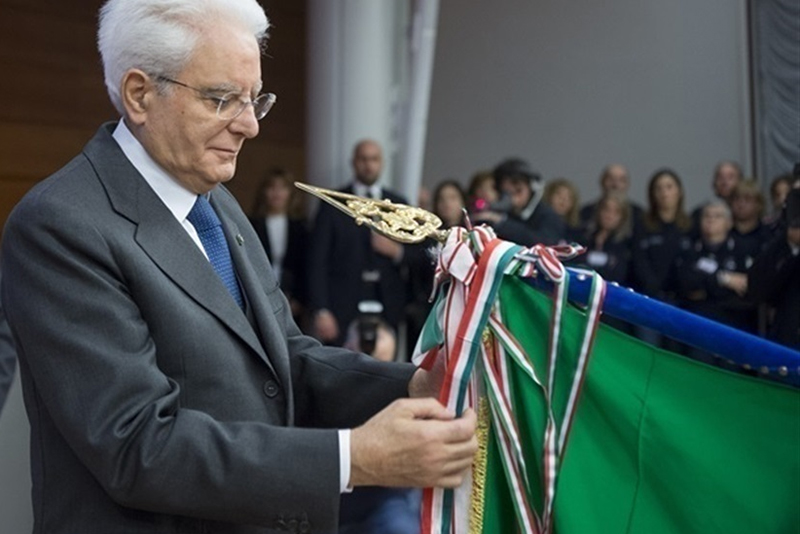 Throughout the years, the Civil Protection Department has been awarded a series of honors for its work during emergencies.

These are medals that ideally reward the entire National Service, with all the Components and Operational Structures.

The Civil Valor rewards are granted by the President of the Republic to honour acts of exceptional courage that highlight civic virtue and to distinguish the people who committed them as worthy of public honour. They may be granted to citizens, military departments, bodies and agencies. The Department was awarded a gold medal:

The honor was awarded for the earthquake emergency that struck the territories of Central Italy between 2016 and 2017. On that occasion [...] the Civil Protection Department ensured with its own personnel a constant and effective coordination of the Components and Operational Structures of the National Service of Civil Protection. It provided proof of admirable self-sacrifice in the organization of relief and assistance to the affected populations, as well as in the subsequent work of restoring normal living conditions, receiving the unanimous gratitude of local communities and the whole country, together with the general appreciation of the international community.

The handover ceremony took place in Rome, in the operational headquarters of the Department, on December 11, 2017.

The Civil Merit Awards are granted by the President of the Republic to reward citizens, organizations and bodies that have stood out for the exceptional civic sense demonstrated in rescue actions. The Civil Protection Department was awarded three medals:

The medal was awarded to the Department for the 2009 Abruzzo earthquake emergency, for the [...] constant and effective coordination of components and operational structures as well as civil, military and voluntary organizations of the National Service of Civil Protection, providing evidence of admirable commitment in the organization of relief and assistance to the affected population and in the subsequent work to restore normal living conditions, receiving the unanimous gratitude of the local community and the whole country and a general appreciation by the international community.

The award is given for the humanitarian commitment and the activity of relief and assistance to the populations affected by events and natural disasters that occurred in 2004 and 2005 in various parts of the world. In particular: the Bam earthquake, the Beslan terrorist attack, the tsunami in Southeast Asia, the New Orleans hurricane, and the Kashmir earthquake. The medal is also awarded for the organization of major events, notably the funeral of Pope John Paul II and the 2006 Winter Olympics in Turin.

[...] The Civil Protection Department of the Presidency of the Council of Ministers gave proof of extraordinary commitment, in the sign of the values of solidarity and humanitarian commitment, guaranteeing assistance and help to the vulnerable people tragically struck. [...] At the same time, with high competence and extraordinary efficiency, the Department was able to coordinate in Italy the organization of major events that have attracted millions of people and involved the world public opinion.

The award ceremony took place on September 26, 2007 in Colfiorito, on the occasion of the commemoration of the tenth anniversary of the earthquake that struck Umbria and Marche in 1997.

The Department was awarded for its meritorious work during a series of events in 2002: formation of an epiglacial lake on the Monte Rosa glacier in Verbano Cusio-Ossola (June); volcanic and seismic activity in the province of Catania and earthquakes in the provinces of Campobasso and Foggia (October-November); hydrogeological instability in Northern Italy (November); tsunami in the Aeolian islands (December).

[...] In the circumstances described above, the Department of Civil Protection of the Presidency of the Council of Ministers ensured constant and effective coordination of the Bodies, Corps and Structures operating within the National Service of Civil Protection, providing proof of admirable commitment in the preparation of relief for the population affected by the tragic events and in the subsequent work of reconstruction and restoration of environmental conditions. The generous action of all the components assigned to the activity of civil protection is an admirable example of dedication to the good of Italy.

The medal delivery ceremony was held on July 15, 2004 at the Quirinale Palace, in the Piazza d'Onore.

The Order of Malta honor is reserved for those who have participated in the works of the Order, endangering their lives.

Conferred to the Department by the Prince and Grand Master of the Order of Malta, it is awarded to the men and women of the Civil Protection Department who "have succeeded in transforming the dedication that drives them into effectiveness and efficiency in relief actions in Italy and abroad, and made the Italian Civil Protection system an admired and respected model and its volunteers an example of professionalism, charity and sacrifice".

The award ceremony took place on 1 October 2011 in the gallery of Palazzo Colonna, during the commemorative concert for the twentieth anniversary of the bilateral agreement between the Italian Government and the Order of Malta for cooperation in civil protection.